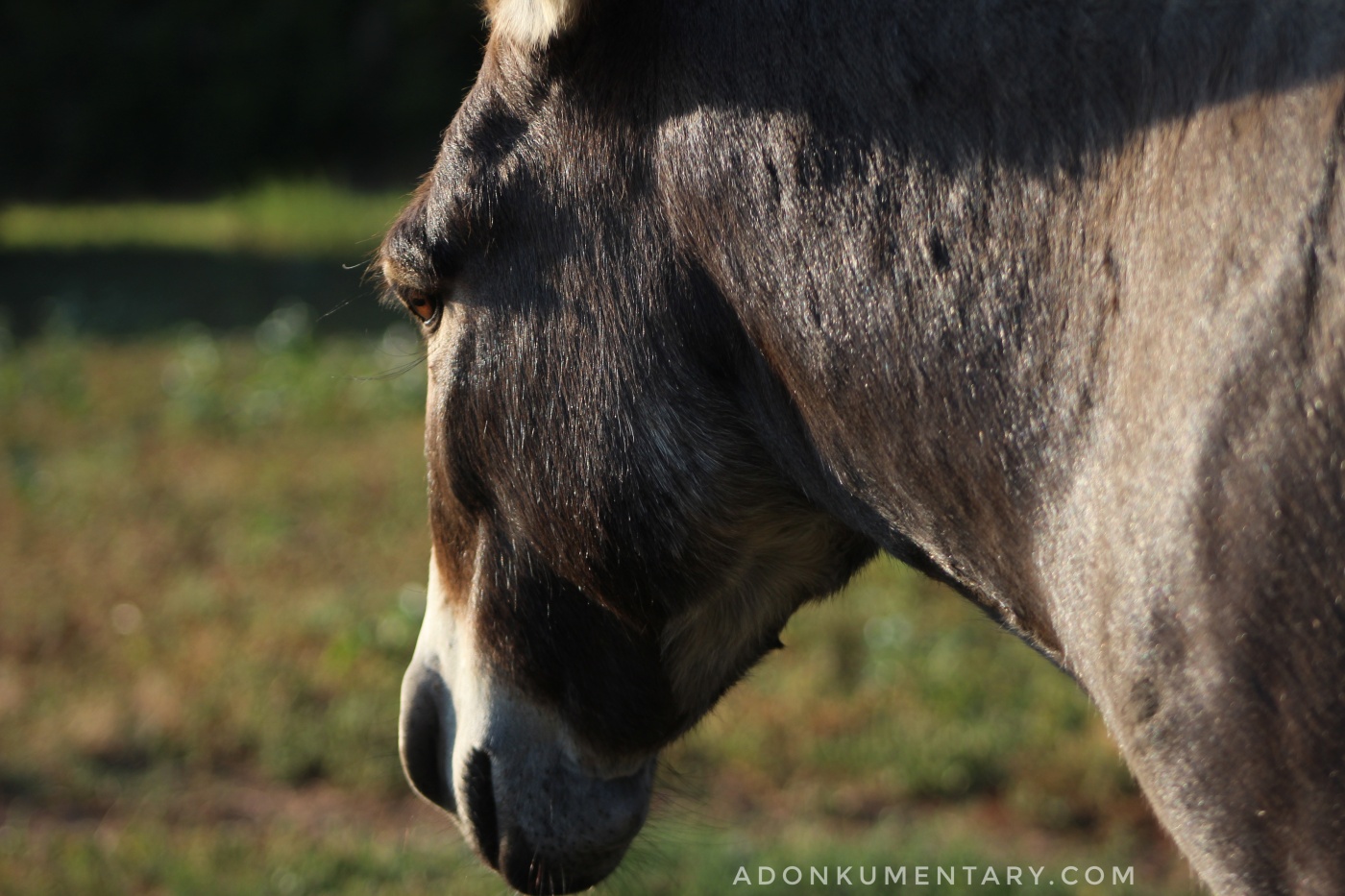 I repost this 4-year old story because we can all be heroes. We need more heroes, big and small.
___

**I want to start this post by noting that contrary to popular belief, not all donkeys are natural guardians, especially mini donkeys like my little Tee. Please don’t assume donkeys will act as guardians—in fact they can be quite vulnerable to predators. Make sure that if you own donkeys, their fencing, paddocks, barns, and sheds are secure to keep them safe from threats.**

Earlier today, I was out fixing part of the fence in the pasture while my two year old son sat next to me drawing shapes in the dirt with a stick. The town’s roaming flock of guinea hens fluttered about on my property with four young guinea chicks in the center of the group. As I secured a new section of chicken-wire, the guinea-hen flock suddenly burst into a frantic squabble. I turned to find a small-ish (I’m assuming young?) wild boar charging the flock.

I should note that upon first glance, I thought that the hog was some kind of domestic pig. There’s a notorious woman in our town who breeds pigs and animal control has about had it with how often her young pigs get loose. But this was no domestic pig. This was a boar with a line of thick, black hair down its back and stripes along its sides. Boar’s noses are typically longer, too with room for tusks.

I stood from my project when the hog caught sight of me. I paused and it paused and for a moment, we stared at each other. I gripped the wire cutters tightly in one hand and with the other, slowly nudged my two year old son behind my legs.

The guineas retreated into the bushes, their chattering terrified, and the boar began running straight for my son and me, snorting angrily. I turned to pick up my son and began to run thinking maybe, just maybe I could outrun the boar or at least take a few swings with the wire cutters. As I fled, from the right like a bolt of lightning, Tee, my mini donkey, came flying through with his head down and ears back.

The boar squealed, changed course not fifteen feet from my kid and me, and ran away so fast he was nothing more than a black and brown blur. Tee followed directly behind him grunting and bucking his legs and running after that boar faster than I ever seen him move. Dirt and sand ballooned up fiercely in their tracks.

Tee chased him all the way to a small opening in the fence far across the property which the hog struggled to squeeze through. It managed to escape as Tee stomped his hooves around and around.

I clutched my son tightly in my arms, my heart pounding so heavily I could hardly hear a thing. Bunny and Tink appeared behind us, eyes wide and ears up when my kiddo said, “Mommy, Tee chase that pig so fast!” All I could do was nod. We all watched Tee who paced back and forth across that small opening, his ears perked and chest puffed.

I’m in absolute awe of our mini donkey right now. I’ve known that Tee is fiercely protective of my son for a while now, but I didn’t know he had this in him. I’m flabbergasted and grateful and dumbfounded. I don’t know what that small boar would’ve done had it reached us. I don’t want to know. I also, apparently, have another part of the fence to secure.

I would assume that mama boar must not be too far off which has me nervous. I’ve heard about wild boars being a thing out here but…Hoo boy. As they say, sh*t just got real.

Tee was our hero today. I….I just kind of can’t even right now.

I think I’ll make him a carrot cake.