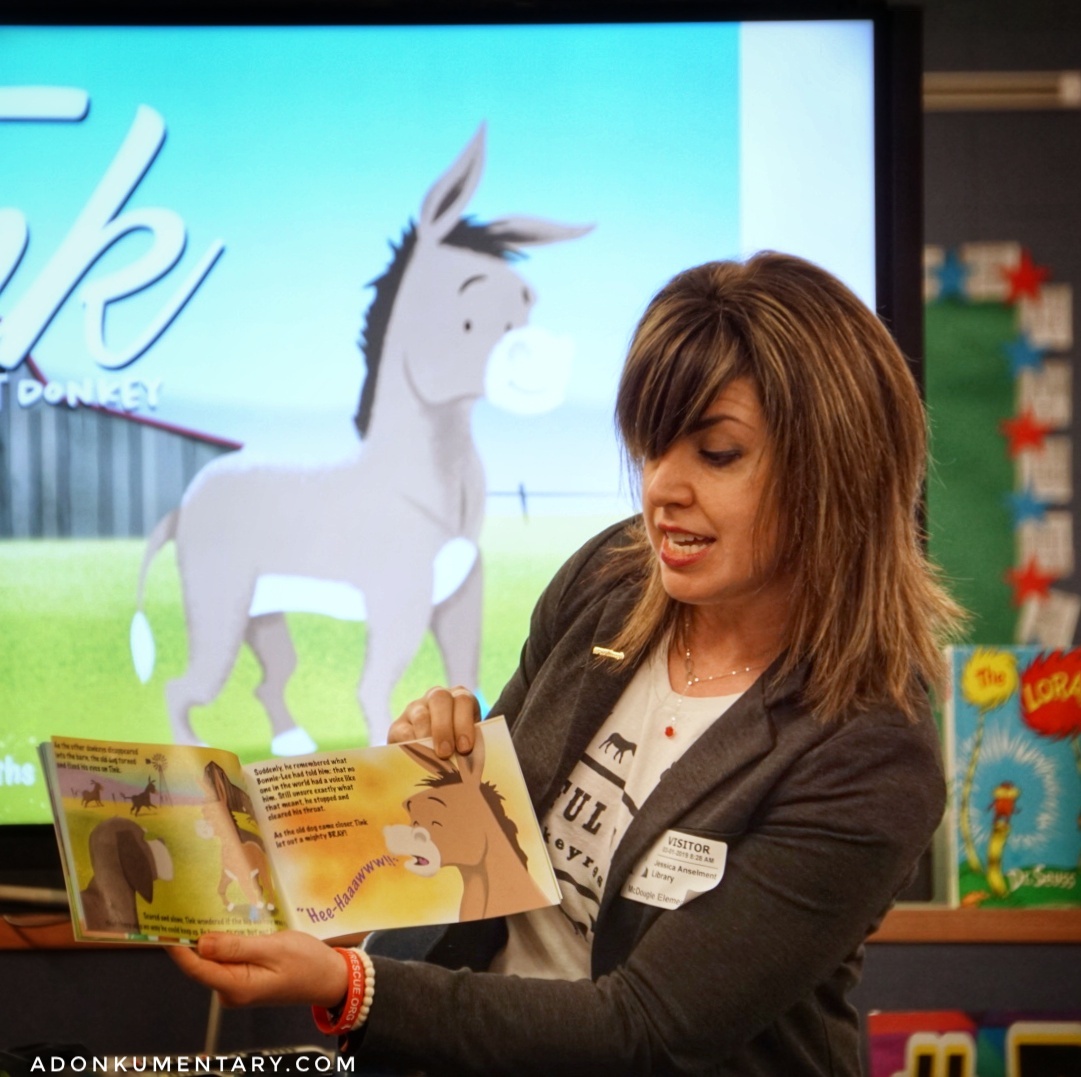 It’s morning rush hour as I inch along in my gray car on a 10-lane, gray highway beneath a swollen, gray sky. The whole world is a heavy gray and the weight of it all seems to rest right in the center of my gut which turns with a groaning sound. Start, stop, start, stop. Inch, break, inch, break. Sweat beads on my brow which sucks because today is a day that I have actually and carefully applied makeup. I dab at my forehead with a crumpled napkin from the center console.

On the passenger seat next to me is my travelling-reading bag which I’ve toted around to several schools who have invited me out to read my book, “Tink the Bravest Donkey,” and talk donkey rescue with their students. Within the bag are several signed copies of my book, the actual blue boot that Tink the real donkey used to wear, my laptop, a Tink story board, and little bracelets to give away. I’m on my way to an elementary school to read for several different groups and for reasons which I’m unsure, I’ve spiralled into a full on panic attack.

This isn’t the first time this has happened, not by a long shot. As a person living with anxiety, it’s not uncommon for my mind to spin out without warning at the most inopportune times. I used to think there was something wrong with me—like physically wrong—when this would happen. I’d be fine, going about some mundane task, when all of the sudden, I’d start having trouble breathing in. Was something wrong with my circulation? Was I having a heart attack? Stroke? Only in the past couple of years have I understood that these symptoms were not physical sickness, but unrest from deep within my mind.

Google maps (my forever driving companion) tells me my exit is in half a mile, but still, it takes me nearly 15 minutes to get there because of the heavy traffic. Inch, break, inch, break. I’m so worried that the giant, shiny pickup truck that’s been riding my tail with what must be only centimeters between us is going to bump into me. Why won’t they back off? Why do people do that?

I feel nauseous and the idea of being sick to my stomach only deepens the worry that I’ll have to take a vomit break while trying to read my story to eager students. You have to breathe, I tell myself over and over, but it’s about as useful as telling my dog to stop barking when the squirrels chirp at her from high up in the branches. Try as I might to pull my breath down to the bottom of my lungs, over and over it breaks at the base of my throat.

Finally, I exit and pull off to a gas station on the corner of a busy intersection and park in front of the Stop-n-Shop which advertises Monster Energy drinks, buy one get one free. I imagine two of those would make your heart explode. Mine feels like it might right now. I’d planned my commute to get to the school about 20 minutes early, so I have a few minutes to spare. I unbuckle my seatbelt, lean back in my chair, turn up my music, and close my eyes.

I’ve learned over time that panic attacks are not situations from which you can just “calm down” because they’re not a mood and at least in my experience, they’re not even circumstantial—at least not consistently. They’re sporadic, sudden, and often inexplicable. In the case of this morning, am I nervous about doing several presentations at this school? Sure, a little. Who isn’t nervous to perform no matter how well they know their subject? Also, this is my first children’s book: it’s a really big deal to me. But I’m not afraid. I’m not panicked about it. This attack is coming from somewhere else—somewhere deeper and over high heat. It’s water bubbling up and beginning to boil because the fire’s hot under that pot.

After several minutes of trying to picture jellyfish-like movement of my breath, I open one eye to look at the clock and realize that I need to be on my way. I don’t have time to sit here and wait for the panic to pass, so I sit up, pop myself on the cheeks a few times, and back out of my parking space.

In my mind as I near my destination, I start reciting lines from my book. “Cock-a-doodle-doo, what’s with the shoe?” The kids love this part because I ask them to make rooster sounds with me (and as loudly as they can). I also recall a comment on one of my Instagram posts a while back where someone told me that the rooster is their child’s favorite character.  “‘Cock-a-doodle-cool!’ The rooster said.”

I pull into the school’s parking lot and grip my steering wheel tight. You’re going to be fine, I tell myself again and again, even if I can’t quite believe it.

I check to make sure I haven’t smudged my makeup, grab my travel bag, and head towards the school’s front door.

I’m happy to report that the presentations I gave all went wonderfully. It seems that as soon as I got busy with the task at hand, there was no more oxygen left for panic to consume. The children were amazing, the staff was amazing, and I suspect that donkeys gained some new, little advocates.

I write about this because there are many of us out there—many of us with anxiety, panic, and depression in our brains and I for one have spent a lot of time scared and ashamed to admit it. I’ve feared judgement, distrust, and condescension because to much of our society, mental health is still wildly misunderstood and often pushed aside or swept under the rug. The more we avoid talking about it, the more stigmatized it becomes and the more myths about it perpetuate. Studies show there are 40 million people in the US who have anxiety disorders. That’s no small thing. And it also means you’re not alone.

So my victory I share with you in case you might need it as a tool in your toolbox: apparently the remedy to my sudden and inexplicable panic was busyness with something that I couldn’t (and certainly didn’t want) to wiggle my way out of. I put one foot in front of the other until without me realizing the shift, I was breathing normally again. The distraction must’ve snuffed out the panic attack. I suppose it’s along the lines of what we give oxygen to is what will live and breathe—although I recognize that it’s not always that simple. An anxious mind rarely has the ability to compartmentalize, so it’s not always easy to pick and choose what you allow to breathe. But who knows, maybe in some instances, it’s exactly what’s needed.

The bottom line is this: your mind is a beautiful thing—lined with panic or not. It’s powerful and complex and nothing to be ashamed of. Love and care for it deeply and always because it’s you, baby. It is your most powerful tool, your most valuable asset, and it’s you. You are worth nurturing. You are worth taking the time to understand. You are worthy of love. You as you as YOU. 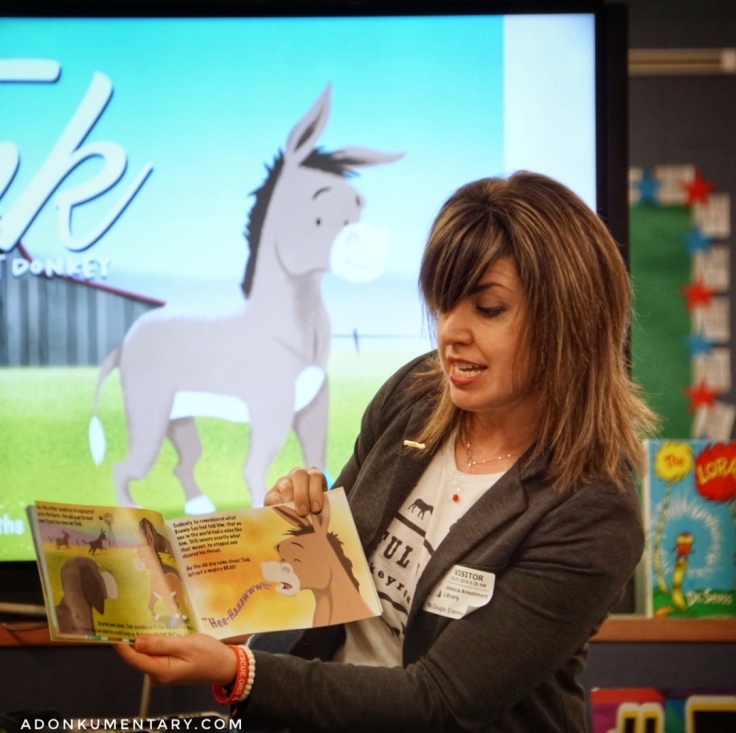 One thought on “It’s You, Baby”