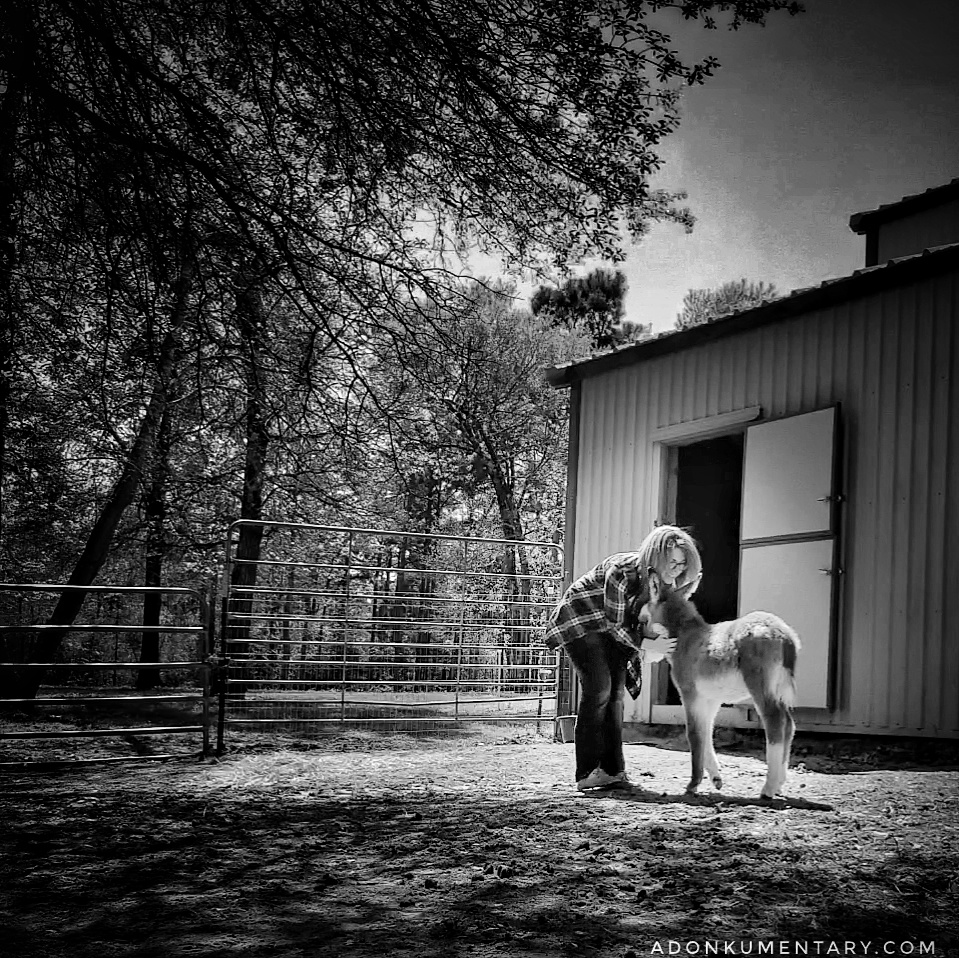 It’s late. I’m not sure of the time, but it’s been night for a while—long enough for the dark to feel damp and for the scattered clouds to have a purple tint. In my jammies and boots without socks, I’m walking through the wet grass out to the barn where Bunny, Tee, and Baby Bodhi are likely resting.

With both hands, I slide open the barn door and flip the light switch just inside. Three sets of ears perk up high and like a burst of beautiful light, Bodhi leaps for me with his ears back and his tiny tail wagging. Bunny and Tee, from behind their stall door, begin to bray. Shaky, I kneel down and scratch Bodhi’s soft fur, his chin resting on my shoulder. He still smells like a baby.

It’s been three days since I’ve seen my sweet donkeys: I’ve relied on King Ranch and my parents to help care for them while I’ve been severely ill. In and out of the hospital and unsure of the time when I wake up from long rests, it’s been a blur of chills, lightheadedness, groggy sips of Gatorade, and much anxiety over what is happening in my tired body.

I stand, my head dizzy for a starry-eyed moment, before I open the stall door. Normally, Bunny and Tee race to reach me first (especially if it’s been some time since I’ve seen them) but tonight, they’re delicate in their approach. They know I’m unwell, I can see it in the wideness of their eyes and in the care of their steps. Bunny nips at my hair while Tee presses his head into my thigh. Bodhi stands against my other leg, his tail swishing from side to side.

In the dim barn surrounded by the quiet of night and warmth of my donkeys, I peer up at the light above which flickers with silhouettes of June bugs and moths. I draw in a deep breath, close my eyes, and surrender the walls I’ve taped up around my emotions to the midnight air. Tears begin to stream down my cheeks.

I don’t remember a time when I’ve been this sick, at least not as an adult. And to complicate things, my pre-existing heart condition is succumbing to the stress and making my movements and presence tedious and difficult.  The good news is, I’ve seen a host of doctors and have seemingly turned a corner to see a light at the end of this dark, dank, claustrophobia-inducing tunnel where I’ve left a scattered trail of my weight, strength, and optimism.

I’ve been unsure as to whether or not I wanted to write about this but the thing is, I write to figure out my feelings. I have to spell out thoughts to see them straight—to remove them from the neon nebulous of my anxious mind where I don’t have a single train of thought, but rather, a bustling train station buzzing with people yelling in languages that I can’t understand.

I have a friend, a wonderfully talented novelist who bravely moved her life overseas and is one of the most inspiring people in my life. She writes her stories and essays in a way that transfers the reader to the front lines—to the smells and tastes of places they’ve never been—and the other night, she messaged me out of concern to check on my health. It’s been years since I’ve seen her in person, but across the world, her concern and love of my feelings made way for a platform to begin to explore my own understanding of the depth in which this aggressive illness has dug. In talking with her, my heart touched by her words (because she’s just the kind of person who can be so warm and empathetic, even oceans apart), I realized that in this illness, there have been moments where I have actually feared for my life…like really thought it might be over for me. I think this must have been the first time I truthfully and legitimately feared that my end might be near and although that moment is now in my distant and hopefully unreachable past, it’s left me in a strange, emotional place. I don’t mean to be dramatic, but the swift severity of my condition left little room to feel like I had much of a fight.

(To be clear, I am fine. I am going to be fine. There were just a few days in there where I really thought I might not be fine and those ripples are still splashing around pretty hard.)

As I stand here in the barn, these three donkeys doing everything in their ability to comfort me, I am overcome with…I don’t know what it is. Gratitude for sure, but something else. Purpose? Raw presence? I’m not sure. That very real fear has done something to me and even though I know I’m out of the thick of the threat, there’s this pulsing light from beyond my field of vision that’s reminding me of the fragility of all of this. It’s a blocked off area  that stays just beyond my sight with giant, red, boldface letters that says “RESTRICTED” because only those who are emotionally equipped to handle the reality of how temporary life is can enter without crumbling. This very human condition: that we are all momentary.

Little Foot climbed up into bed with me yesterday and rested his curly head on my chest.

I twirled his hair between two of my fingers and said, “I think my heart is happy you’re here.”

And it was. It is. Oh my it is, my heart flips in my chest at the sight and even thought of my sweet, little boy. He’s barely three years old and already he helps me feed the animals, collect eggs from the chickens, tells me stories that are made up in his imagination, and reminds me that you don’t have to be of a certain age to really know how to love.

Bunny lowers her head and rests it against my chest. I wonder if she can hear my struggling heart, too. I look down to see tiny, damp dots freckling the donkey’s faces—my tears having dripped from my chin onto them. I think they’ve moved closer to me, the weight of their bodies giving me strength to stand even though I’m so, so tired.

On the shelf beside us is Tink’s bright blue halter. He was wearing it the day he passed. Little Foot asked about Tink for the first time in a while the other day (before I fell ill) and I told him that Tink died. I used those words….he died.  “But where did he go?” Little Foot asked with a puzzled look. I told him that I wasn’t sure, but I believe that even when people or animals die, they’re still out there somewhere in some way. I told him that I think they must be out beyond the stars, so maybe you can look up at night and see if anything up there reminds you of him and if it does, then he’s definitely still alive in your thoughts. Among all those twinkling, tiny dots are so much more than meets the eye, so look as hard and as often as you can. This seemed to satisfy him. He also asked if the slug that he accidentally stepped on the other day is up there, too, because he was very sorry that he smushed it, he just didn’t see it before he stepped. I told him that I’m sure the slug is up there.

After a while, I shuffle the donkeys back into their stalls, laying a kiss upon each of their heads, and close the barn door. Purple clouds glide across the sky which is nearly singing like a full choir with twinkling stars. So many tiny dots. I breathe in deeply, their light filling the broken parts of me, before exhaling deep gratitude, relief, and hope with a long sigh.