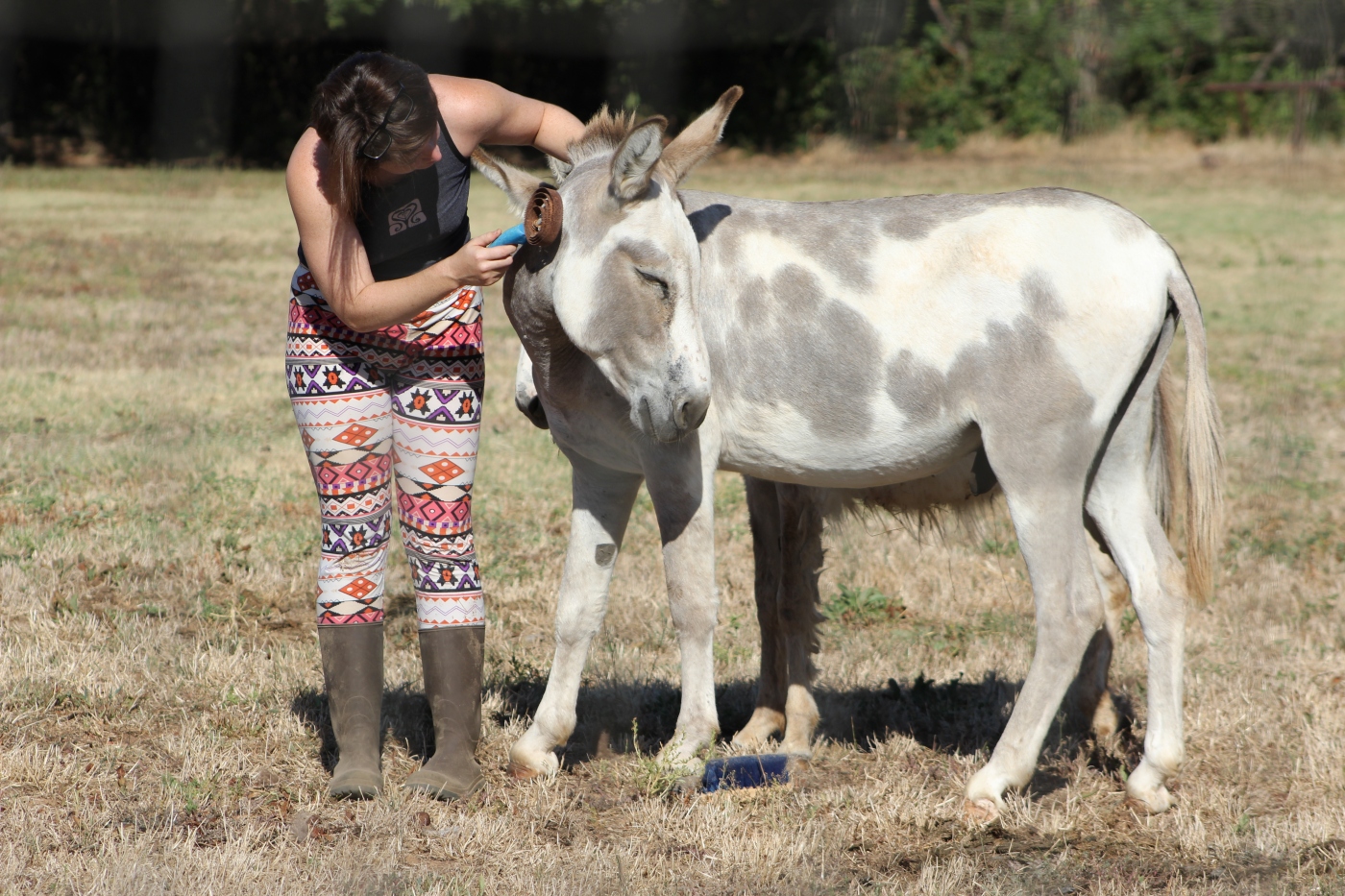 Sweat ran down my spine in slow, chilly lines as I stood in the driveway with one hand shading my eyes from the sun and the other waving goodbye to a man and woman from central Texas who pulled away carefully in their large, white pickup truck. Attached to the back of their truck was a black horse trailer and peering at me nervously and seemingly confused through the slits in the side was Ali—the first foster donkey who’s left my ranch to live out his life in his new, forever home.

Earlier that day, I spent some time in the pasture securing halters on all five of the donkeys that I had available for adoption. I brushed them and wondered who, if any of them, I’d be saying goodbye to today and equally felt excited at the prospect and dreaded it. I studied each of them closely trying to remember every detail of their faces. I watched the way Ethel, the 10 month old jennet, stomped her back foot when she got frustrated that the other boys took her place around the hay. I watched how Charlie, a two year old all-brown gelding, slowly blinked in what seemed like relaxation when I brushed him. Beans, the two-year old wild-caught burro, had just started becoming comfortable with me, allowing me to pet his nose and actually brush his back—unless I made any sudden movement, in which case he’d dart away. Simon, the eight-year old black and white gelding, has been quick to steal my attention since the five fosters originally arrived. One of his eyes is half black and half white—not the actual pupil, but the lids around it; half black and half white like a little yin-yang. I wonder sometimes if that’s what makes him so balanced. Then there was Ali: a 6-year old gelding and a mix of gray and white. His background prior to being rescued is unknown but whatever has happened to him, it’s caused him to be overly affectionate. He rests his head on yours and leans all his weight into you and when you rub his jaws, his large, black eyes close behind long, black lashes as he sways gently.

When the man and his wife showed up to meet our donkeys, I led them out into the pasture to spend some time with them. I kept my distance to allow the couple to interact and soon, it became clear that they had begun to latch onto Ali and in turn, Ali latched onto them: he pressed his nose into the man’s chest and nosed at his inner arms. The man grinned widely and wrapped himself around Ali, whispering things like “hey there” and “you’re a sweet one, huh?” into Ali’s ear. I tried to pretend it was sweat but really, tears had started to sting my eyes. The man and Ali were bonding…like really bonding. It was touching to see the sensitive side of this man that I’d only just met. Of course, it was just as touching to see Ali reciprocating.

It didn’t take any convincing. Soon, the central Texas couple were backing their trailer up to the gate as I attached a rope to Ali’s harness and began to lead him towards the edge of the property.

Ali walked proudly beside me—his ears up and steps confident. Having rained the previous day, we left a trail of side-by-side hoof marks and boot prints in the mud and as we approached the gate, Ali suddenly stopped and resisted. He saw the trailer, looked at me, looked at the man and his wife, then back at me and froze. Placing my hand between his ears I told him that it was going to be okay before I tried tugging on the rope and on his harness. “It’s okay, bud. You can do this, it’s okay,” I said, but if you know anything about donkeys it’s that when they’ve decided they aren’t going to move, there’s nothing that can really be done to move them. The man and his wife tried to help, but this only made Ali lean his weight more heavily into me.

Still, he resisted. I tugged with literally all of my strength (and as I’m sitting here typing this now, I can feel the soreness in my arms and back from the struggle) but I may as well have been tugging at a skyscraper. He would not budge.

I decided we should take a break and I sat down on the edge of the trailer, wiping the sweat from my brow. My forearms had a layer of dust that stuck to the beaded sweat over my freckles and as I lifted my hand to pat Ali on the head, it shook uncontrollably. I think I was nervous. Ali leaned his head down and placed his nose in my lap, so I rubbed the base of his ears and told him that everything would be okay. I told him that I knew this was confusing and scary but that everything would be just fine. He buried his head deeper.

After a few moments, I got back up and with the help of the couple, we managed to get Ali into the trailer.

Ali is a decently sized donkey but as they pulled away, he looked very small in that trailer. His eyes were wide and his demeanor, nervous. I wiped my eyes as they left my view and told myself that he was going to be okay. The couple was lovely and had great plans in store for him. He was leaving us and he was going home.

I knew fostering donkeys would be difficult. I’ve knowingly and voluntarily signed myself and our property up to be a bridge from an often broken and painful past to a hopefully bright and loving future for donkeys in need. My space is only temporary before they find their happily ever after. I’m only here to help them get there.

Still, it’s difficult. It is an impossibility for me to become attached to the well-being, futures, and overall existence of these donkeys. I’ve brushed them and held their heads in close to my chest when our horrible neighbors were cracking fireworks in the middle of the night. I’ve sang to them and fed them and worried for their safety knowing that at any time, it will be their time to move on.

In a way, I’m reminded of the struggles that I have with being a new mom. I constantly worry about Little Foot being out in the world and about him growing up and moving on and not needing me to slice his grilled cheese sandwich or secure the velcro on his sandals. I’m heartbroken in anticipation of the day when he tells me to go away, but I also want (more than anything) for him to grow up and be a functioning member of society who is successful at what he chooses to do. I don’t know how to walk that line of protectiveness and letting go.

In his book, The View from the Cheap Seats, my very favorite author, Neil Gaiman, has a chapter (that was actually his acceptance speech for the 2009 Newbery Medal) where he talks about how if you as a parent do your job well, then when your children grow up, they won’t need you any more. They will go on and live their lives in their own futures and it’s true. Little Foot, if I do what I’m supposed to do, will grow up and not need me any longer. That is, sadly, the goal…although I can’t find peace in it. Not yet, at least.

The same goes for these donkeys. During my time, they require my whole heart because really, there’s no other way to have a donkey. You can’t half-heartedly move into donkey ownership…or half-ass, if you will. They’re complex, deep, thoughtful creatures that know when their owners are genuine and well-intentioned and will react accordingly. They also know when their owners don’t care and sadly, that’s where many of them get stuck and/or abandoned. They are creatures that are emotionally affected by absolutely everything.

But wholeheartedly or not, I am only their bridge. Their vessel. Their portal to greener pastures and today, I had to say goodbye. Prepared or not, it was really hard.

I suppose that means I did my job right. I trust the couple who’s taken him and I know that he’ll be happy. I know this is right. As Neil Gaiman said, it is the “…fundamental, most comical tragedy of parenthood that if you do your job properly, if you as a parent raise your children well, they won’t need you anymore.” 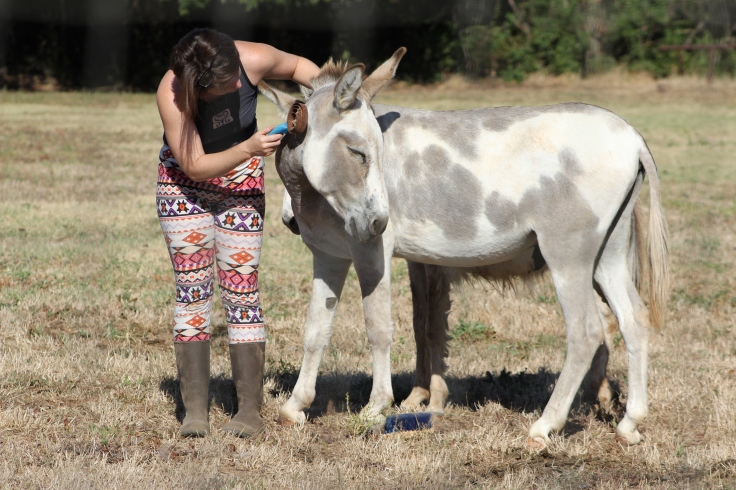 5 thoughts on “And Then There Were Four: Saying Goodbye to Ali the Foster Donkey”