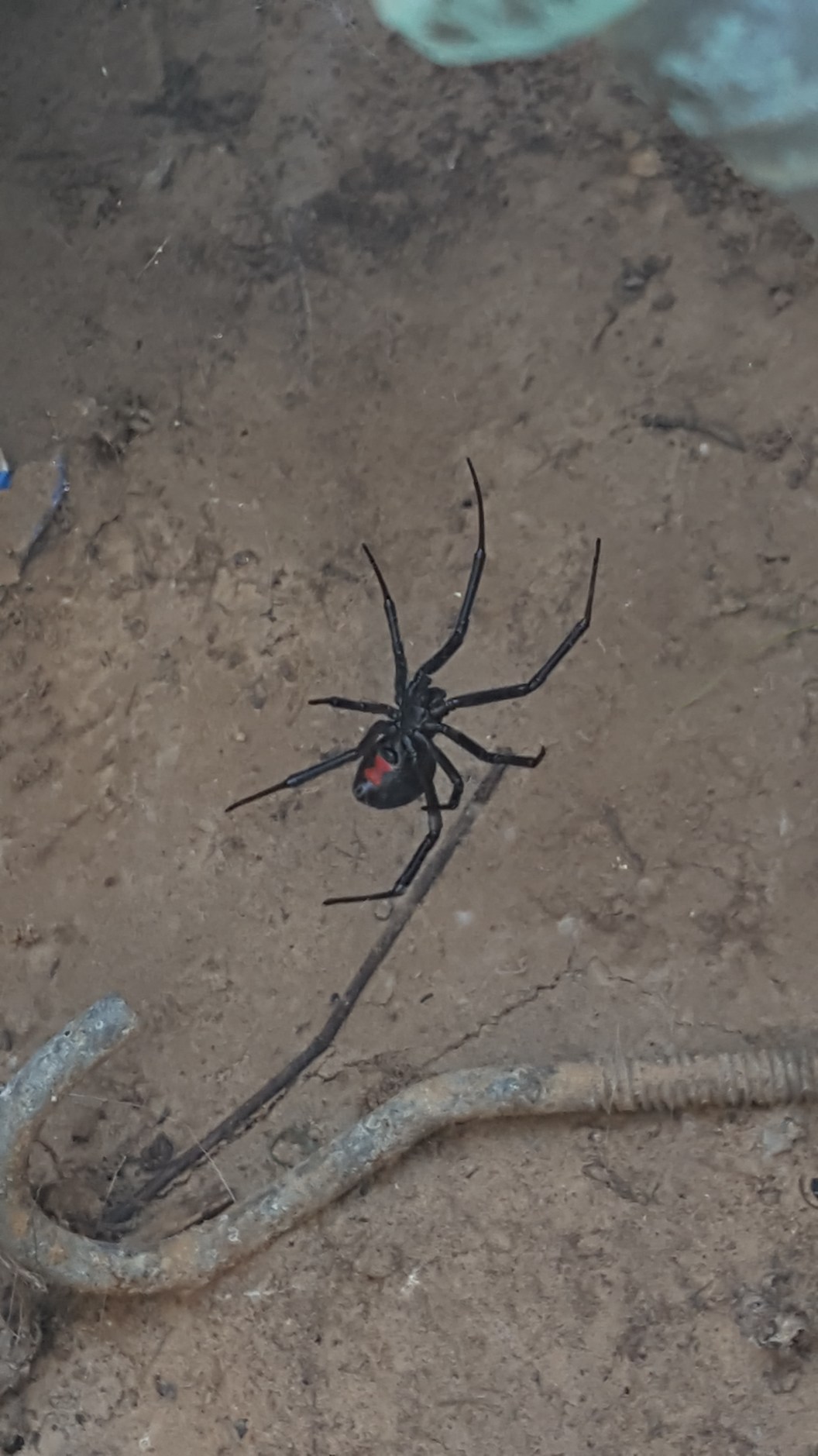 Before reading below, make sure you’ve read Part One! Link here: The Ghosts of Summer: Part One

The black widow’s eight legs are sharp and shiny like daggers. Clearly, she’s sharpened them. In my left hand is the hose, still running—the water splashing heavily in the mud around my feet. Like yesterday, I look around for a stick or something similar, but as I shift my eyes, in my peripheral, I see the widow move a few steps in my direction.

I fix my gaze back on the widow who freezes: her legs stopped mid step. The sun beats angrily down on us—our shadows small underneath the high noon sun. Nearby, Bunny and Tee have lifted their heads from grazing in curiosity.

I think that surely, this is a different spider because King Ranch most certainly killed and dismembered yesterday’s identical black widow. I don’t know enough about the spiders to know if they travel in packs. If by some strange, cosmic force, this was the same spider, I’m sure she’s furious and ready for revenge. If this is a different one, perhaps a sister or a parent, then vengeance is in order. Whoever she is, she’s angry.

What I do know is that in this moment, I can’t blink. She would surely strike if given the split second.

I remember then that I already have a weapon: the running hose. I press my thumb over the opening, creating a pressured spray. The widow is watching this and I could swear that she, too, is looking around to plot her next move. Two of her legs curl in close to her and as quickly as I can, I turn the hose and spray her with everything I’ve got.

She clings to her web, all of her legs curling in tight. Her web is strong, unbroken by the pressure of the hose. I step closer and spray harder.

She retreats—scattering up the web and behind the circular handle where she’s blocked from the water. I spray still and step closer. To my right, from the corner of my eye, I see the same stick that King Ranch used yesterday and with full hose pressure going and my eyes fixated on the round handle behind which she is hiding, I fumble to reach the stick with my right hand. Finally reaching it, gripping it tightly, I release my thumb from the end of the hose—the water once more plopping into the mud below. Beads of water shimmer along the chaotic pattern of her web like twinkling stars.

She remains behind the handle. I can’t see her, but I know she’s there. My heart thuds in my chest as my eyes begin to dry out from having not blinked. Still, I hold my gaze trying desperately to see any movement in the shadows.

My eyes are watering now and the flickering drops on her web are too bright to handle any longer. As quickly as I can, I blink.

As the light enters my reopening eyes, a blurry shadow is scattering with furious speed down a dripping web and into the mud. I stumble back, the stick unstable in my sweating hand. She’s at a full sprint towards me—her eight, dagger legs reaching high and leaving small prints in the mud. As fast as I can, I pick up my boot, wait until she’s nearly reached me and stomp.

I twist my boot back and forth, pressing down as hard as I can—it sinking at least an inch down into the ground.

After a moment and another twist each direction, I slowly lift my boot. She’s flattened: her yellow insides mixing with the brown mud. To make sure, I take a step back and run the hose over her. The yellow and brown swirl together and slowly, her corpse begins to run lifelessly along a small river that’s formed—her legs curled tightly into her broken belly.

Closely examining the faucet and seeing no other spiders, I turn the running water off and carefully wrap the hose around the spigot. Using the edge of my boot, I push mud over the widow’s wet corpse.

It’s the following day and King Ranch, Little Foot and I have just landed from a three hour flight to Michigan to spend the weekend with King Ranch’s family. We’re thrilled to have a break from the heat, if only for a few days. By the time we make it to my in-law’s house, it’s nearly 11:00 PM, so with Little Foot tucked tightly into my arms, we settle in for bed in the room that used to belong to King Ranch’s sister.

Around the walls is hand-painted, forest green ivy sprawling in every direction. There are two framed paintings of fairies wearing water-colored dresses with dainty, reaching hands. The paintings seem old—their colors no longer vibrant but instead, dusted. Little Foot’s body relaxes into sleep and I, too, close my eyes: the last thing I see being one of the fairies staring hopefully up to the sky.

Although we’re inside, it’s quite foggy. A gray mist hovers over the brown carpet while the fairies on the wall twirl inside of their frames. This is the first time I’ve seen sad twirling—they are looking up to the sky with tears streaming down their pale, small faces. They spin slowly and clumsily.

My feet feel heavy, suddenly, and my body feels like it’s growing tall. I look down as the ground is inching farther and farther away from me. The fog clears and bright yellow goo begins to seep up from the brown carpet. I grow taller and taller, yet somehow, feel smaller and smaller when the brown and yellow ground beneath me disappears. I begin falling and falling fast. I reach for anything—the fairies still twirling slowly in their frames that are now seeming to follow me as I fall.

I look up and from the darkness, a red glow appears. It’s faint at first, but then brightens into a beaming red hourglass. Black lines drip and ooze like oil over the fairies twirling in their frames when I see that their heads have turned into small, pointed skulls—their dresses dangling off of skeletal bodies. They wail hysterically when I land in a net.

I try lifting my arms, but they’re stuck to the webbing beneath me. The red hour glass is too bright to look straight into and is growing. I look left and right but soon, even my head is stuck. The redness is so bright.

With a huge exhale, I sit up abruptly in bed, which causes King Ranch to startle awake next to me.

“He’s in the crib,” King ranch whispers, pointing at the wooden crib that my mother in law had set up. Little Foot was rolling over, I imagine, because of the noise. King Ranch says, “I moved him there like an hour ago. What’s going on?”

King Ranch says, “Honey, what is going on?”

“Nothing,” I say, wiping my face. “Just a bad dream, I think.” My heart is thudding and my spine is sweaty.

“Come here,” he says, pulling me into a little spoon. He wraps his arms tightly around me.

I watch the fairies in the frames who are still and dusty once again. They look longingly to the sky.

We’re 1500 miles and several days away from being home at the ranch. The widow will have plenty of uninterrupted time. I shudder and watch the fairies until dawn.