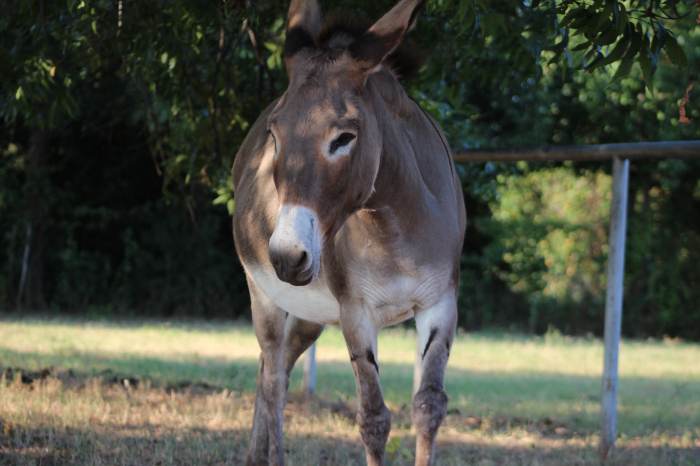 On our property are several pecan trees. During the fall, literally 1000’s of pecans fall with the leaves — some crack open and some don’t. Pecans that do crack open are quickly discovered by hungry donkeys who look forward to the tasty, autumn treat.

During the summer time, however, the pecan trees turn into massive, mushroom clouds of bright, thick green with heavy and far-reaching branches. They’re lovely for shade from the hostile, Texas sun, but do quickly overgrow into forces that are difficult in which to reckon.

The overgrowth also makes it particularly hard to mow the grass. More often than I’d like to admit, I have found myself riding the mower through a low hanging arm of one of the pecan trees that leaves a long scratch across my arm or face.

I needed to do some trimming.

When I have tasks like this, instead of trying to keep up with a very curious and exploratory Little Foot, I strap him into his toddler hiking pack and hoist him onto my back. We both wear sunscreen and hats and I’ve found that he actually quite likes the sometimes hours-long piggyback ride. My excuse to get out of having to do a proper workout enjoys it, too.

I stood underneath the welcoming shade of the pecan tree that sits farthest back on our property as Bunny and Tee wandered up to see what we were doing. When Bunny noticed I had a tool of some sort, she trotted away, likely assuming that I was planning not to trim the tree, but her hooves instead. Tee stayed a few steps away, mostly curious about the companion riding upon my back.

I began trimming. The branches were more tangled than I imagined they’d be. I assumed this would be a pretty straight forward chore, but instead, found that the smaller and older the branches became, the more they weaved in and out of one another. They reached down with curiosity as if they were trying to touch the ground. None of them actually did, so I wonder if they talked about it amongst themselves. Maybe it was a competition. Who could reach the ground first?

Bunny decided that my shears were, in fact, not a threat and followed closely behind me to nibble on the leaves of the branches that tumbled down to the ground. Over my shoulder, Little Foot’s glossy, blue eyes watched my chore intently. Sometimes, he’d snort.

Branch after branch, I chopped. Some were easy and some required more might. Sweat accumulated where the straps of my Little Foot pack wrapped around my hips and chest and had even started to run down my forehead, stinging my eyes. Still, I chopped.

I began to notice that many of the branches that hung down lowest were actually barren: dry, prickly sticks not producing anything but weight. I felt bad for them. They were sad. I felt guilty for chopping them away having worked so hard to get here.

From the lowest hanging stick’s point of view, I could imagine that I was quite terrifying. A sweating, two headed monster wielding a long, bright orange and black pair of shears whom, without warning, chopped off the arms of these innocent branches. Behind me, my noble steed dined on the remains of those fallen.

But it was my duty to chop. I had to. I swore an oath to protect my land and that included trimming the trees so that I could properly mow. Otherwise, our land would become a breeding ground for snakes and even more mosquitoes than there already were.

Some branches went down easily and without a fight while others struggled until the end. The more I chopped, however, the more I realized the way the blooming bits of the branches would spring far up towards the sky and even bounce a few times having lost the weight of the bare sticks.

Perhaps these sticks, instead of holding on, were actually looking to be let go.

The pecan trees — nutrient producing and life sustaining beings don’t have the capability to remove their dead bits. They need assistance. My, how the branches perked when I removed those parts which were bare.

I chopped more, but this time, triumphantly! I was healing a hurting tree!

This took just over two hours. Little Foot actually fell asleep on my back. I decided to take the extra time of his nap and clean out the donkey’s water troughs. They were grateful. All that noble-steeding left them quite parched.

Of course this made me wonder what it is that I’m holding onto that I just can’t bring myself to release. I know there are things. I know that there are memories that creep around in the dusty parts of my mind that feel exposed and raw whenever something shines their light on them. There are people who, when they pop into my vision, my heart hurts. Literally, it hurts. There are angry bits, too, that when poked or prodded explode in a fury of 4-letter words and end with tears.

I know they’re there. I know it. But I don’t know how to chop them off.

Sure, I still bloom. I still do my job. I mostly look nice. But my insides, in many ways, are quite heavy.

King Ranch pulls barren branches off from time to time. He sees them. As does my mom. As do most people who get close enough and who care to notice. Then again, I suppose we’ve all got dead stuff lingering around. Even when it’s all chopped and cleared away, next season, there will be more.

What I’m finding now is that it’s a much harder task to go through and release the pecan trees of their dead weight when I’ve let it get out of hand. If I’d have kept up with it, this chore would have been done in a fraction of the time and with a fraction of the effort.