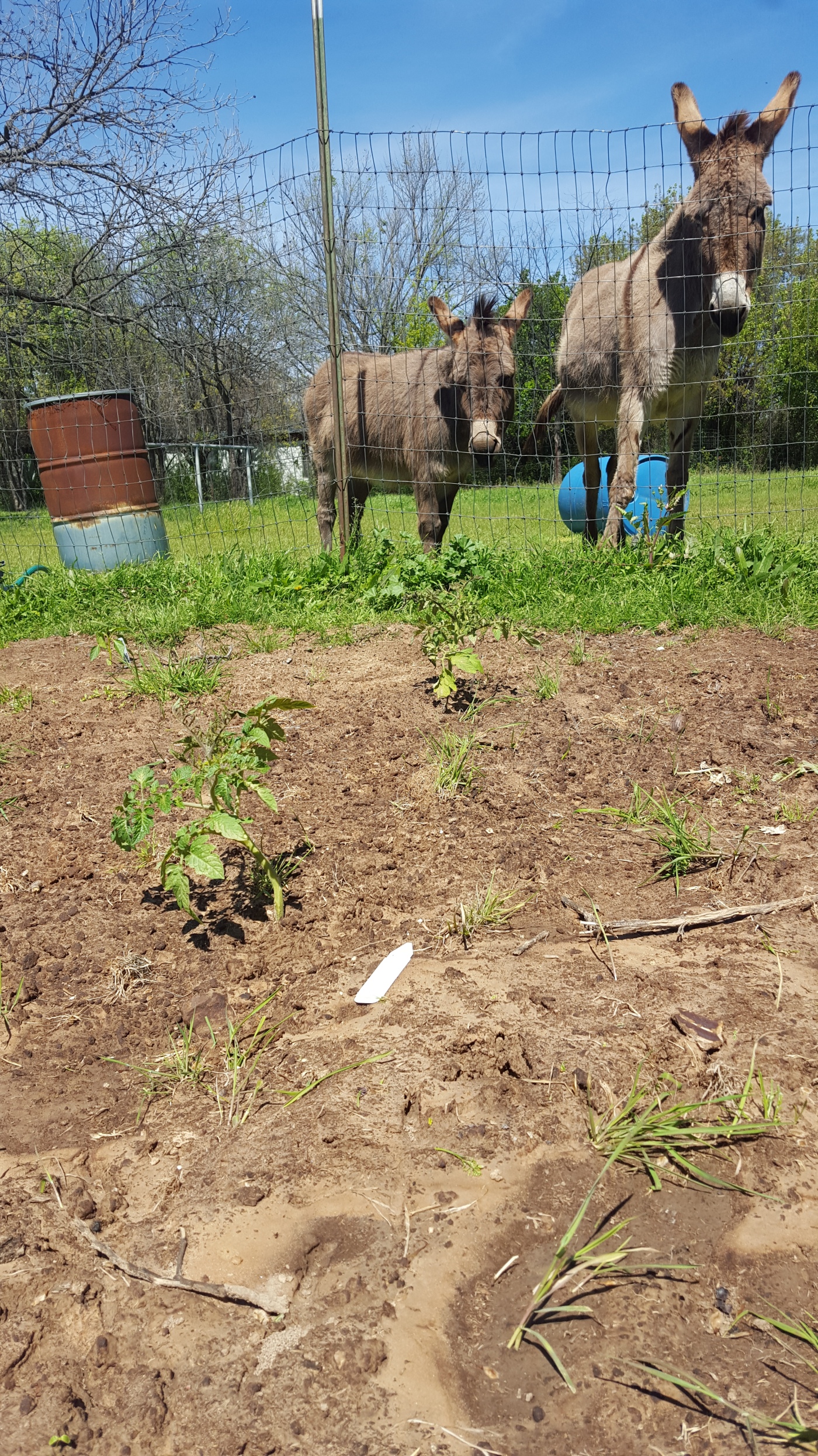 When King Ranch and I decided to make the move to this property a year ago, one of the things I couldn’t wait to get going was a garden. I so desired the opportunity to build a homestead – to live off the land.

It’s taken us a whole year, but we’ve finally done it – planted a garden.

I’ve never done this before. I watched my mom and dad grow a small garden on the side of the house where we grew up in northwest Houston. I don’t remember much about it except for my mom in a big hat, my dad with a wheelbarrow, and a few fruit bats that started hanging upside down outside my window at night, peeping as I fell asleep.

I suppose all things are new and fragile until you’re used to them:

– Parenthood, for example – I remember crying my eyes out one day (okay, more like every afternoon there for a while) because I was so afraid that Little Foot wasn’t getting enough to eat. And, seriously, I just knew he was going to die if I wasn’t there to pick him up the second he started to cry.

– Lifestyle – city life to ranch life? The closest grocery store was how far away? And how often do we need our well serviced?

– Relationships – I think they all go through a ‘polite’ stage where, you know, it’s all ‘yeah, I’m down for whatever because I’m so laid back and just want you to be happy’  and ‘Oh, it’s fine that you left dirty dishes in the sink for three days because you’re just so freaking beautiful that I don’t care.’

– Even new jobs – right now, King Ranch is delicately stacking up the blocks of his days at his new job with the utmost detail because it’s all so…new and fragile.

Nevertheless, it’s now in the ground: tomatoes, peppers (bell, poblano, and jalapeno), an eggplant, several types of lettuce, onions, snap peas, cucumbers, two types of grapes, and raspberries. Planted in pots on our back porch are herbs (mint, cilantro, basil, and dill) along with an over-sized pot filled with potatoes. 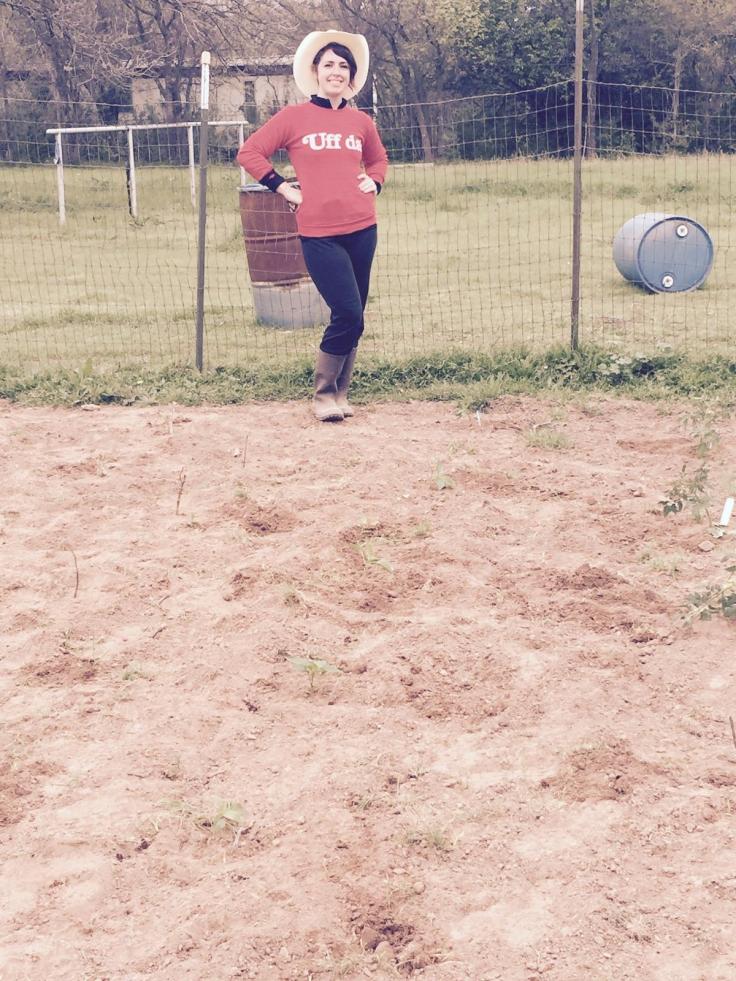 I’ve been out every day to check on it – the new garden. The baby plants. I’ll admit, I’ve talked to them a bit. “This is your home, little lettuce. We’re gonna take good care of you.” 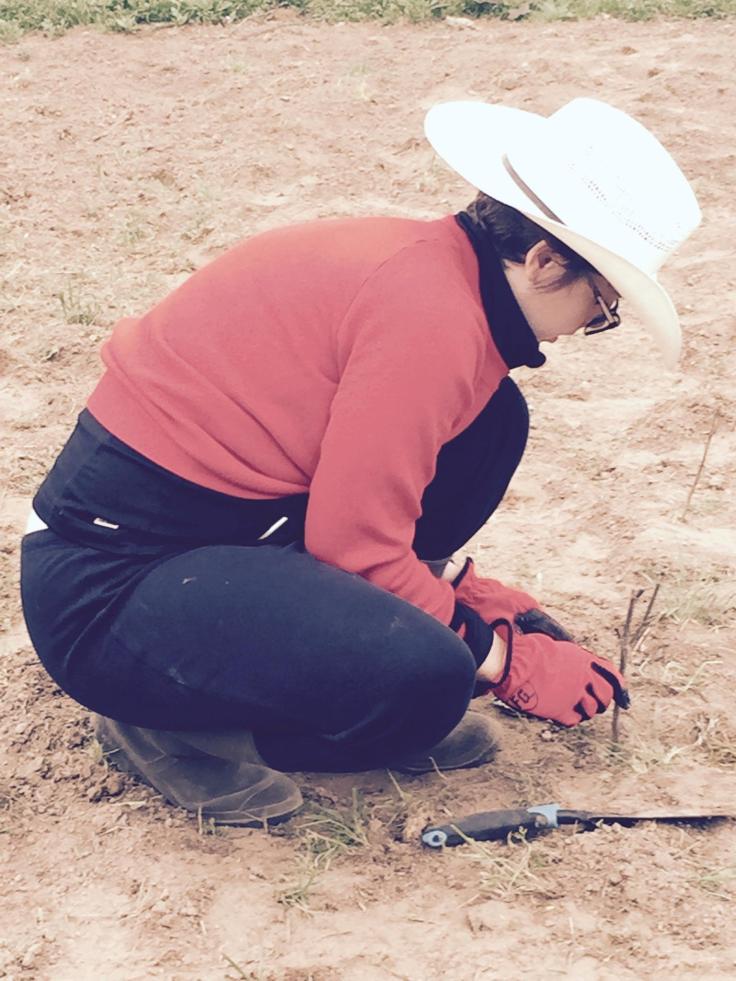 Last night, a severe storm pushed through the area. Springtime in north Texas, we’ve learned, is dramatic. Funnel clouds reach down from the sky like bodybuilders reach down for kettlebells in front of one another – glamour muscles flexed, veins popping – it’s intimidating albeit, impressive – but also kind of annoying because unless you’re into that kind of thing, you’re ready to move onto more peaceful scenery – like the repetition of an expert rower or the gazelle-like strides of an intermediate to advanced runner on a treadmill.

Massive gusts of wind that travel, I think, down the southern end of the Rockies and tumble, gaining speed across the Texas plains, don’t just push over pots, but tear major artery branches out of trees and toss them over houses – usually into expensive things like cars or brick mailboxes.

There are sometimes the lovely, Earthy, peaceful lightning storms that resemble the cover of a mediation album, but then there are the flashy lightning storms – sequined, spinning ball gowns underneath sparkling chandeliers at a rich kid’s high school prom – the music heavy with bass.

As the thunder rumbled the foundation of our house and my phone screamed with tornado warnings, I mentally noted my list of major concerns.

I laid there and worried about it – the tomato plants, especially, because they’re, so far, the tallest and I think, most likely at risk of dying in harsh winds. Remember, I’m a novice at this – these are just my own conclusions.

I could barely sleep all night thinking of my garden. Every time I heard the chimes clang nervously on the back patio, I cringed at the thought of stems snapping, leaves detaching, and hail pelting these eager plants.

Between the mini blinds, blue lights flashed like paparazzi.

It’s morning and King Ranch has left for work and Little Foot is awake and ready to run everywhere. I pull on some pants and open the curtains in the livingroom. To my surprise, it’s a brilliantly sunny day – richly green grass and saturated trees are tangled with bouncing squirrels, fleeting robins, and disappearing dew.

It’s also quite chilly – for March in Texas, that is. About 40 degrees.

Bundled up, Little Foot and I head outside to check on numbers 3 – 5 on the worry list. Bunny and Tee bray loudly when they hear the gate clang and trot over to us with alert ears. With the exception of a little extra mud around their hooves, they look just fine. Mornings after storms like this, I get the feeling that the donkeys come running up to me to tell me all about the storm last night. They’re extra clingy and by now, you should know I love that.

All the chickens and roosters are accounted for, except for Resurrected Zombie – but that’s not unusual – and they’re extra-energetic and excited with the bugs they’re finding in new mud puddles.

The garden looks just fine. Soaked, but fine. I do feel, however, that I should put stakes by the tomato plants in preparation for the next storm so I don’t worry so much that they could tumble over. So I do. I stake them. 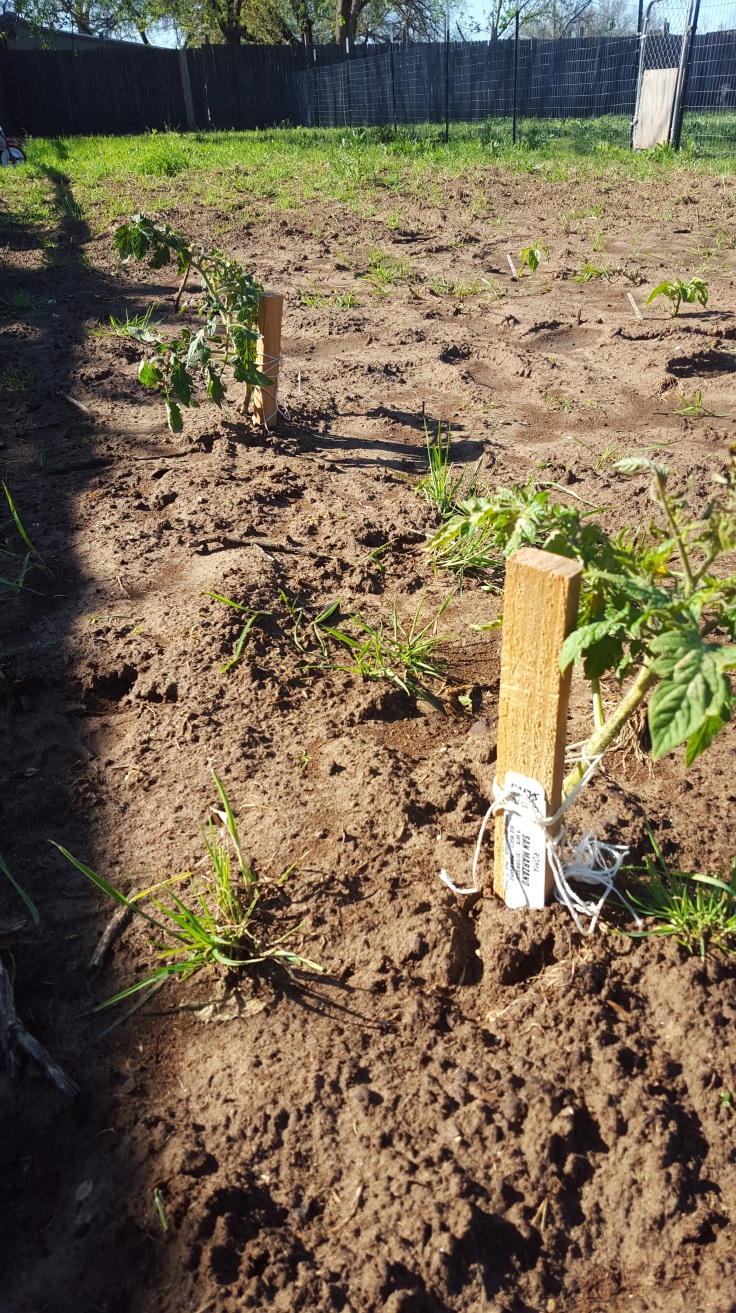 I fluff the leaves a bit and call Little Foot over so I can show him what I did. I don’t think he understands my words yet, but he certainly seems interested in things like wood, string, tools, and most especially, dirt.

This is, undoubtedly, the first of many storms this season. This is also, I’m sure, the first of many gardens. I imagine one’s first garden is much like one’s first pancake – kind of a flop. Probably still edible, but the subsequent servings are far superior. You have to learn the timing, the texture, the temperature, and most importantly, the patience, to perfect pancakes. And gardens. And parenthood. And homeownership. And pet ownership. And relationships. And life. And, well, yourself. It all takes time and practice and inevitable mistakes along the way.

Little Foot is not only alive, but healthy. As are the donkeys. As is my relationship. There have been many times I thought that I’d ruin each of those because of my ignorance and/or inexperience and/or stupidity and/or a million other reasons why mistakes happen. But I just kept going. I still keep going. One day at a time.

Be patient. Be cautious and smart. But be patient. You’ll figure it out. Stake that shit and keep going.