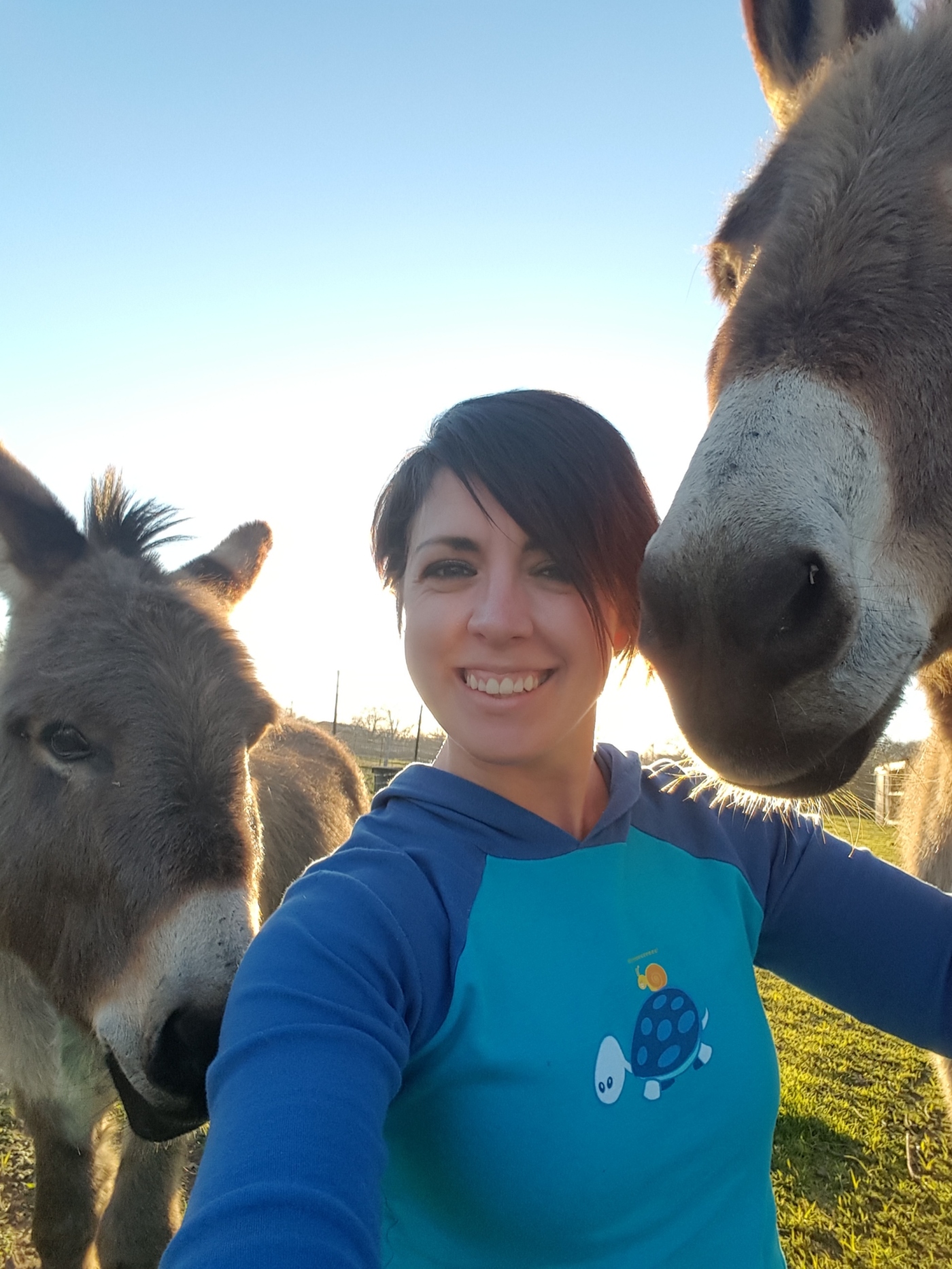 Wearing a bright green sweatshirt that’s sporting a brown t-rex, Little Foot is stumbling around through dried, crinkled leaves while waving a short, dry stick in the air and giggling uncontrollably. Just in front of him is Thing One who seems only mildly okay with being chased in circles through the yard. I’m watching this adorable scene over my left shoulder while holding a chunk of  brand new, chicken-wire fence steady with my hands, as King Ranch is looping circular nails through its wiring to secure this new fence to tall, forest-green posts buried deep in the ground.

“Can you hold it steady?” King Ranch asks under an irritated sigh.

“Oh,” I say, turning back to the fence, realizing that I’ve let it sway. “Sorry.” I peek one more time at Little Foot running around and then focus on my hands.

We’re fixing to get our garden started – an impressive, 24’x 100’ lot that has been carved out of the paddock closest to our backyard. Big plans are in store for this plot – tomatoes, cucumbers, peppers, onions, zucchini, squash and an array of herbs. Fruit trees are also being considered – pear and peach, perhaps.

Just on the other side of this project are the donkeys seemingly confused by the rising barrier. Bunny stays in line with me, only the wiring of the fence separating us. Every few seconds she turns her big brown eyes back to me and blinks heavily as if she’s searching for understanding.

Tyrion the mini donkey is pacing back and forth along the erecting fence, stomping his back, right hoof every few steps. He’s not happy. Change, I think, is something in which donkeys are not fond.

“It’s okay, little girl,” I whisper to Bunny while leaning over the fence to see my reflection in her eye. She lowers her head.

I glance back down to my hands and realize I’ve pushed the fence towards the donkeys.

“Sorry,” I say while shifting it back in line.

King Ranch is wearing a cream-colored cowboy hat that’s covering his face, so I can’t tell if he’s actually frustrated, concentrating, tired, or a mixture of all of those. A dolphin-croak behind me and I turn to see Little Foot a few paces away picking up a small, broken pecan. He opens his mouth and raises the pecan.

“No!” I shout, releasing the fence and scrambling towards Little Foot. Before I can reach him, he throws the pecan and runs away from me. This spooks Bunny who trots away with her ears straight up. I hear King Ranch exhale heavily and drop something metallic on the ground.

We’ve been out here for a while now  trying to get this fence up. King Ranch was out here well before Little Foot and I and although it’s still technically winter, the sun has beat down on him long enough to make this the most frustrating project in the world.

Tyrion walks past King Ranch and around the fence that isn’t yet nailed into the final post and slowly saunters towards Little Foot who is using a stick to push dried leaves around on the ground. He lays his ears back and noses Little Foot’s shoulder gently. Little Foot turns for a second to acknowledge Tyrion before focusing back on his crispy, lifeless leaves.

“Any news?” I ask, rolling up the sleeves of my shirt while walking towards King Ranch who’s staring at the last post not connected to anything yet.

He pulls his phone out of the front pocket of his dusty jeans and holds it up to his face. He presses some buttons on the screen with his thumb and focuses for a moment. “Nope,” he says without emotion.

I wrap my arm around his back and lean my head against his shoulder.

King Ranch is possibly very close to landing a job not too far from here. He’s had a couple seemingly successful interviews with this particular company and several encouraging followups from the assigned recruiter. Now, we’ve just been waiting.

I don’t think that either of us want to give our hopes up about this potential job, but at the same time, we want to pour good vibes into the possibility. It’s exhausting to go through application after application and interview after interview without success. I, myself, have been interviewing with various full-time jobs around the area but unfortunately, have not been extended an offer that would cover the cost of child-care for Little Foot.

King Ranch runs his fingers up and down my spine twice before walking back towards the house in a tired shuffle. He leaves long, sliding boot-prints in the dirt.

Little Foot is hitting Tyrion in the nose with a stick.

Little Foot grins and throws the stick down. I squat down next to him and pick up a different stick.

Little Foot grabs the stick from me and pokes a few tired, tan leaves beneath him. A warm exhale behind me and I turn, bumping my nose into Bunny’s snout. She snorts and actually shoots a bit of donkey snot onto my cheek. 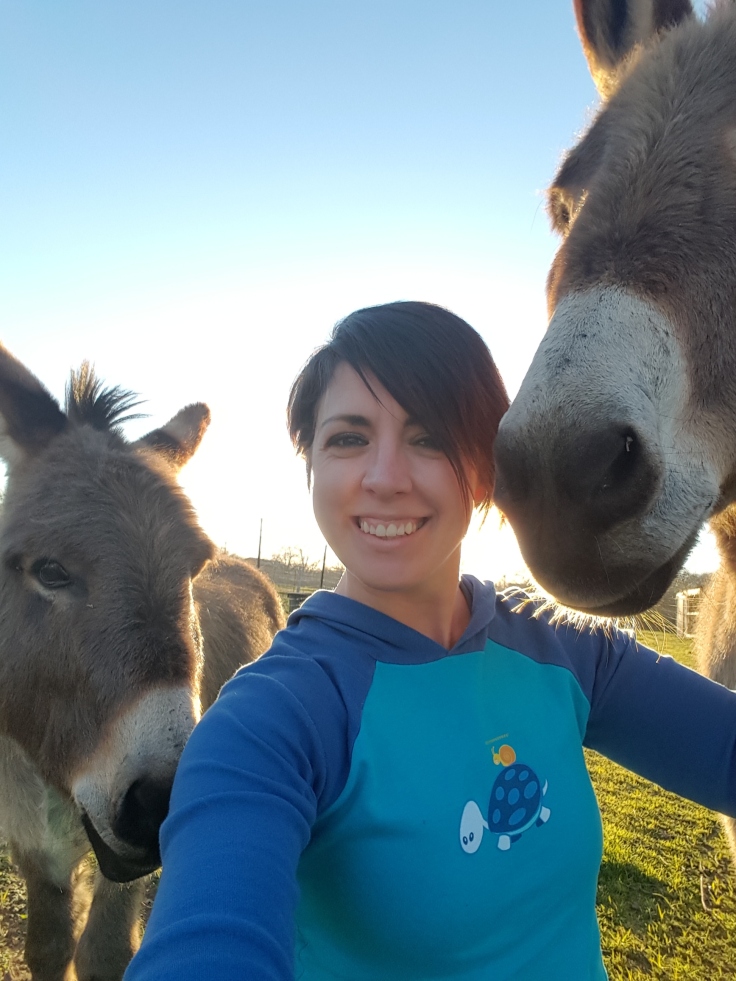 I think she might have a cold or allergies or something. She’s been a little snotty-nosed and crusty-eyed the past few days. Wiping the snot from my face with the inside of my arm, I giggle to myself. Warm donkey snot. Why does that seem cute? I’m astonished with how little bodily fluids affect me these days. When you have a toddler and live on a farm, you get covered in stuff. All kinds of stuff.

Bunny noses my hair (likely getting snot in it) and then rests her jaw on my right shoulder. I’ve read before that this is a sign of affection for donkeys. I lean my weight into her as she leans hers into mine. With his ears back and his eyes half-open, Tyrion is standing close to Little Foot who is now drawing lines in the dirt with his index finger. The breeze picks up a few leaves and sends a faint smell of sawdust, as well as a few feathery specs of white, past us.

King Ranch walks back into the yard carrying a Miller Lite in one hand and a red solo cup in the other. I stand up, patting Bunny on the snout who starts to back away.

“Whatcha got there?” I ask, extending my hand.

As he’s swallowing a gulp, King Ranch says, “Let’s get this last part done, then we can go in.” He points his beer to the end of the fence. I nod and place my cup on top of a blue barrel that’s been sitting in the yard since we moved here.

Little Foot is still drawing shapes in the dirt and every so often, grabbing handfuls of loose sand and tossing it in the air with a smile.

I return to my spot on the fence as King Ranch squats down with a box of nails.

“Thanks for helping me,” he says.

The next day the fence is complete, gate and all. It’s a perfect fence ready to have the growth of a garden within it. Our options seem endless. There’s so much space for so many fruits and vegetables. We’re ready to till which brings us even closer to being ready to plant.

The next day, King Ranch gets a confirmation from this company – he’s been offered the job and all pre-employment processes have been confirmed and completed.

He built that fence. He got that job. He did all that.

Now, as we move into spring, we get to see what grows. And we are so excited. 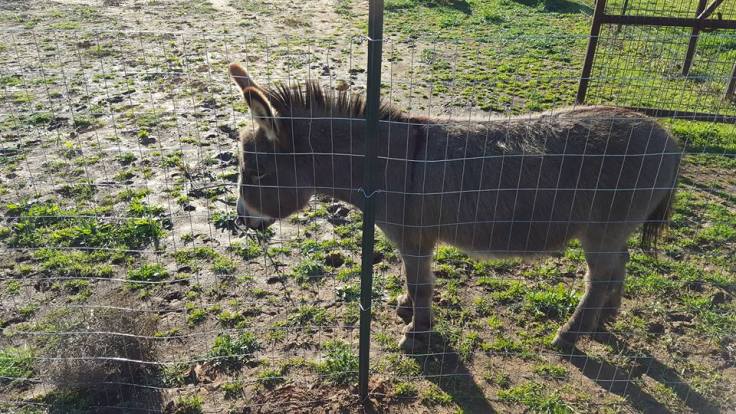 2 thoughts on “Beginning a Garden”