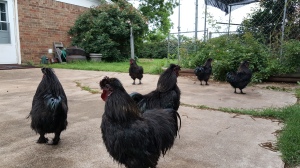 We’ve got some visitors this week.

Backstory: It took us a few weeks to figure out just how many roosters and chickens became ours when making the deal on the house. (This is Texas, after all. It’s not strange that our deal makin’ includes trading of livestock and other farm animals.) And unlike many (what I assume is normal) chicken-keeping  situations – ours just sort of wander the land.

What we did know was that there were three chickens that mostly stayed in the coop – even though the door remained open. There were another three (but sometimes four) chickens that just pecked around the backyard and the side of the house. We would see a rooster from time to time – and finally figured out that we had three: An all-black rooster only slightly larger than our chickens as well as a yellow rooster who is always closely followed around by a tiny brown one (we call these two Frick and Frack).

During these studies, King Ranch and I swore we’d seen a fourth, much larger rooster roaming around at one point. The kind of rooster that would be captain of the football team. The Jock. Voted most beautiful. Long, flowing tail feathers. Technicolor-body. The most classic ‘cockadoodledoo’ you’ve ever heard. But we hadn’t seen him since the beginning…until this week….

So back to our visitors:

A gang of three new roosters have been scoping out our new digs. They have, for the most part, kept their distance from us. But they’re getting closer – perching up on a fence studying the food we’re throwing at our flock. There’s the jock (as mentioned above). His right hand man is a smaller rooster who’s almost completely blonde. Beedy eyes, too. The third keeps a bit of distance from the other two – a reluctant tagalong. We mistook the third for one of ours the first time we saw him – he’s all black, only barely larger than our chickens. Perhaps the kin of ours?

Being new to all this, we’re not entirely sure how long they intend on staying, nor if this is a common occurrence. So far, we haven’t noticed any big fights – although the chickens and roosters have widened their wandering radius pretty dramatically. I had to chase one of our chickens back into our fence this morning! So are they becoming more familiar with us and gaining confidence to explore? Or are they keeping distance from the encroaching three?

As a long-time inner city resident, I learned very quickly that if you put food out on your porch for a cat, you’ll become the go-to for all the stray cats in the neighborhood. So I imagine if these three amigos start getting fed, well, our rooster count will increase.  But I can’t imagine who in their right mind needs six roosters.

Are roosters to the country what cats are to the city?

On his way to work this morning, King Ranch discovered a half-eaten mouse by our front gate. Tragic. Poor fellow. Looked like a little Disney character – well half of one. It would seem that these three squatters are more violent than our guys. Although I suppose they’re innocent until proven guilty – just seems mighty coincidental that we’ve got three strange cocks on the land and suddenly people (mice) are getting hurt!

I’m told the feed store is a good place to check when you need random ranch advice. Know your feed store folks.  Looks like King Ranch, Little Foot and I need to go get acquainted this weekend.

On that note, I gotta go shoo away some birds with a broom. Until next time!